East Campus celebrated a Baby Shower for Mrs. Laura Garza. She is having a baby girl. Mrs. Garza has worked at our school for the past five years in the maintenance department. We look forward to the birth of our future Varnett Student Baby. Congratulations!
Read More »
Published September 15, 2010 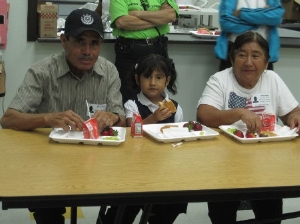 Grandparents' Day at East Campus was A Grand Slam!

Campus Director Voltz reflects on the first day of school

The funds finance the Promethean ActiveBoards, which combine a white board, computer and a projector for interactive student learning. The boards have been installed in every classroom in the district.
Read More »
Published August 30, 2010

From the Office of Nurse Allen