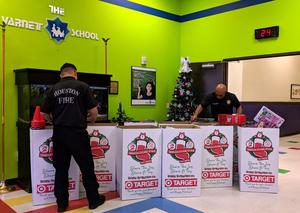 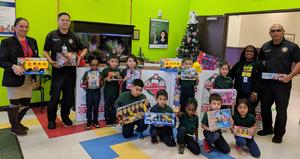 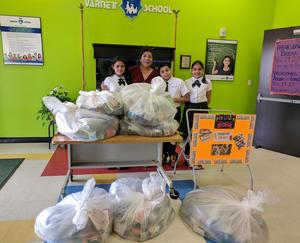 For the past seven years, The Varnett School East has donated four to five boxes of toys to “Operation Stocking Stuffer."  Paul Box, communications supervisor at the Houston Fire Department, has worked with our campus providing flyers, posters and boxes to collect toys.

Last year we were not able to participate because of Hurricane Harvey flooding of East campus and the surrounding neighborhoods. This impact hurt many of our families, especially during the winter holiday season. In a bit of role reversal, Mr. Box arranged for more than 300 toys to be distributed to our school for our displaced students.

This year we paid it back by collecting the most toys ever! Ten boxes of toys were picked up by Houston Fire department’s finest, Ronny Harrison and Francis Tran. The kindergarten students took pictures with the firefighters to show their commitment to the “Operation Stocking Stuffer’s” vision.

The giving back started last month as our sixth-grade middle school students collected 442 canned goods for Thanksgiving. Students dressed down in blue jeans in exchange for two canned goods each on Wednesday, Nov. 14. The cans were picked up the following day by Ms. Connie Serrano from the Bay Area Homeless Services, Inc. in Baytown, which expressed thanks for the much-needed support.

East campus students, parents and staff have given back from the heart and will continue to do so in the future. I would like to thank Mr. Peter McConnell, Mr. Terrell Russell and Ms. Sha'Wanna Jasper from administration for their generous donations.

He says a few years later, seeing the need in the community, Ms. Young approached the Houston Fire Department to see if it could act as a collection point for the toys. As the program grew, Ms. Young saw that her vision had now taken off from a small toy drive to one of Houston’s largest programs to benefit families’ and children’s needs.