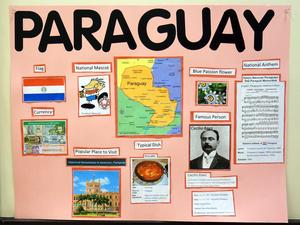 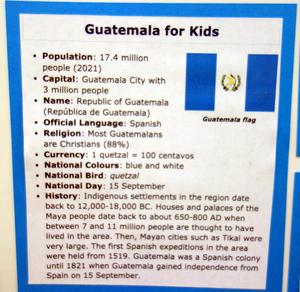 Students and staff combined forces to create posters of Spanish-speaking countries as part of National Hispanic Heritage Month, held annually from Sept. 15 through Oct. 15.
Poster boards throughout the campus paid tribute to South and Central American countries featuring colorful displays of national flags, culture, history, flowers and trees, food and high-profile people including politicians and celebrities.
"We wanted to give students an opportunity to learn about other countries," said Ms. Gayle Voltz, East Campus Director. "A lot of my students are Spanish speaking, but they're not from those countries. They got to learn about the heritage of other cultures."
Click here for more photos
Hispanic Heritage Month was established to recognize the achievements and contributions of Hispanic Americans who have inspired others to achieve success. The observation began in 1968 as Hispanic Heritage Week under President Lyndon Johnson and was expanded by President Ronald Reagan in 1988 to cover a 30-day period. It was enacted into law on August 17, 1988.
The decision to celebrate the month with posters came from Ms. Voltz and Ms. Margarita Estrada, the East Parent Liaison, who provided some of the flags.
"When I saw all of the displays, I was very pleased," Ms. Voltz said. "When the children go to lunch or on to other classes, they're able to see the displays from all the different countries."
Published September 29, 2021 Print